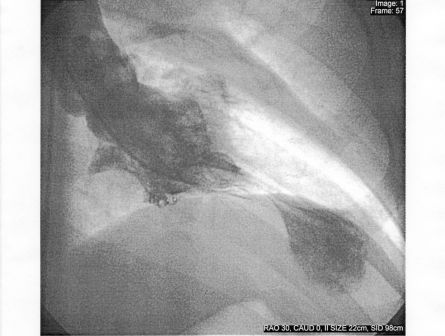 Left
ventriculogram during systole displaying the characteristic apical ballooning with apical akinesis in a patient with Takotsubo cardiomyopathy.
Wikipedia • CC BY 2.0 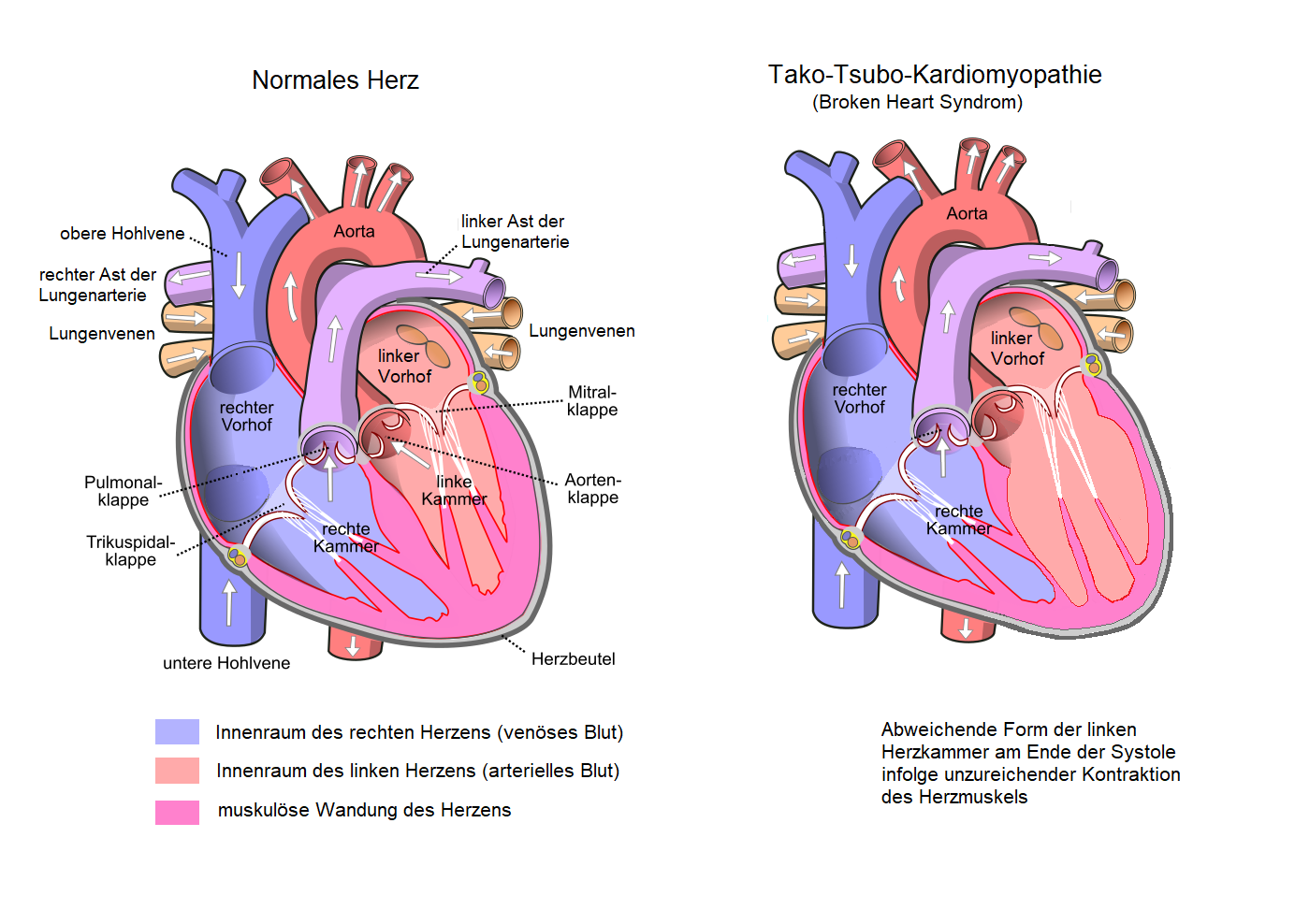 (A)
Echocardiograph showing dilatation of the left ventricle in the acute phase. (B) Resolution of left ventricular function on repeat echocardiograph 6 days later.
Wikipedia • CC BY 2.0
Hallo!
Radiopaedia • CC-by-nc-sa 3.0 • de

Takotsubo cardiomyopathy (TC) (a.k.a. apical ballooning syndrome) is a condition characterized by transient regional abnormal cardiac wall motion, not confined to a single coronary arterial territory. It has been described predominantly in postmenopausal women, often following exposure to sudden, unexpected emotional or physical stress, and is therefore, also known as broken heart syndrome.

Patients typically present with acute chest pain, a physical exam compatible with acute left ventricular failure, and a clinical picture consistent with an acute coronary syndrome. Following the acute presentation, the prognosis is generally very good, with complete resolution occurring in a number of weeks to months.

Patients with takotsubo cardiomyopathy can have high levels of serum catecholamines and plasma brain natriuretic peptide (BNP). The secretion pattern of BNP in takotsubo patients can be quite similar to those with a myocardial infarction. The cardiac troponin level may also rise modestly.

There is a transient left ventricular dysfunction with no evidence of obstructive epicardial coronary disease.

The "takotsubo" morphology refers to the appearance of systolic "ballooning" of the left ventricular apex; it may also involve the right ventricle. Basal segments of the affected myocardium are hyperdynamic with a diffusely hypocontractile apex, with a disproportionately large amount of myocardium affected as compared to the troponin elevation. This regional dyssynchrony may precipitate:

Alternate patterns have been described, including a "reverse takotsubo" pattern in which the basal and mid segments of the left ventricle are akinetic and the apex hyperdynamic, or isolated wall motion abnormalities involving the inferior and/or inferolateral walls .

While the morphology may increase suspicion, the resolution of echocardiographic abnormalities with serial examinations over time increases specificity.

Left ventriculography can demonstrate transient dysfunction and ballooning of the left ventricular mid and apical segments .

On cardiac MRI, four distinct patterns of dyskinesia and ballooning are recognized: apical (most common), biventricular, mid-ventricular, and basal.

There is typically an absence of late enhancement on delayed contrast sequences, which differentiates takotsubo cardiomyopathy from anterior STEMI.

There can be high T2 intensity signal (directly relating to water content in the myocardial wall); the edema is typically located in the apical mid ventricular planes and spares the basal plane, and matches the wall-motion abnormalities seen on cine MRI.

The word tako-tsubo in Japanese refers to a pot used to catch octopi (see Figure 1 opposite) . It is thought to have first been described by Keigo Dote et al. in 1991 .